Storm clouds threatened in the skies above as I left Bozeman, Montana. I made it 26 miles before the rain began. I had just reached the neighboring town - Livingston - and ducked into a coffeeshop to wait out what I hoped would be a typical Montana storm: hard rain for an hour, then blue sky. It wasn't; it lasted all day.

I became fast friends with Kate, the owner of the coffeeshop, and she invited me to put off riding in the rain and stay the night at her house. I accepted, on the condition that I at least wash dishes for her at the coffeeshop. The next morning dawned beautiful and clear, and Kate and I got up early to open the coffeeshop and have a cup together before I set off.

There were only two possible roads east out of Livingston: I-90, or 25 miles of dirt called Old Convict Road. I had planned to take Old Convict Road, but neither Kate nor I really knew how to get to it, and after the rain it could have easily turned into impassable mud. I decided to try to find it anyway in order to stay off the interstate.

I was gathering up to go when the first customer of the day came in - a huge, burly man named Time Keeper. He was a miner and a biker, with a ponytail beard and the most gentle laughing eyes I've ever seen. His gloves were so big I could have worn one as a hat. A beast of a motorcycle, decorated with skulls, was parked outside next to my Vespa.

I asked the Time Keeper if he knew how to get to Old Convict Road. He did, and as he drank his coffee he began explaining the way. After several directions of the "turn left at the third fence post" variety, my eyes glazed over and I interrupted him to dash for a pen and paper. Amused, he asked when I was going.
"Right now," I said.
"I'll ride out there with you," he said. "I've got the morning off."
And so we zipped up our leathers and waved to Kate and must have looked like the oddest pair to anyone out that early.

I followed the Time Keeper's massive, graceful silhouette into the sunrise. He led me out of town and into the open land to the unmarked turnoff that was Old Convict Road. Before he turned back to Livingston, I gave him a hug and showed him the tiny skull decal that discreetly peered out from the back fender of my Vespa.
Posted by shreve at 11:52 AM
Email ThisBlogThis!Share to TwitterShare to FacebookShare to Pinterest

My wife has always said that bikers may look hard on the outside, but they have soft hearts.
John

Amazing....the people you must have met.

It would've been so easy to believe he had every intention of harming you on Old Convict Road. How great that you were able to trust in his kindness and that his kindness was true!

I lived in Wyoming for 6 months and always regretted not being able to go back. The people were the kindest and friendliest, always willing to give you a hand. Even the one's that seemed scary. It was amazing... I know exactly the sort of person you are describling when you talk about Time Keeper.

As Yellowstone employees we were told it was fine to hitchhike if we wanted.. a couple ingenious guys held a sign that said "underpaid park employees.. we know where the bears are" (the most often tourist asked question). They ALWAYS got a ride.

I'm gong back there someday to stay.

i am so lost and unhappy in my life. i wish i could be like you and have the courage to get out there and live my life the way (i think) i want to... for some reason reading about Time Keeper made me want to cry (in a good way). you are so lucky! thank you for all of the amazing photos, and stories. i'll probably be up all night reading ;)

Your story today almost made me cry with happiness...such wonderful hearted people out there.
Thanks

I know that this comment is a little late (I've just been catching up on this blog after following DailyCoyote for several months)... but I couldn't resist.

I was fortunate to work in Livingston this summer and was so excited to see Kate's coffee shop mentioned! Not only does she make a mean latte, but always could tell when to throw in a special word or deed because I was having a rough morning. Her and "Timekeeper" are not unusual in this town, it truly is a great place to feel at home. I do believe I fell in love with that area as you did your Wyoming.

Thank you so much for giving a loving description to a place I am missing very much right now. 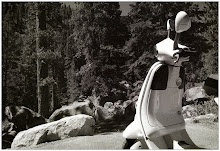